The Itasca Constitutive Model for Advanced Strain Softening (IMASS) has been developed to represent the rock mass response to excavation induced stress changes. IMASS represents the damage around an excavation, slope, or caving process by accounting for the progressive failure and disintegration of the rock mass from intact, jointed, and/or veined rock to a disaggregated, bulked material. IMASS is based on empirical relationships and uses strain and zone-size dependent properties that reflect the impacts of dilation and bulking as a rock mass undergoes plastic deformation.

IMASS uniquely contains two softening (or residual) yield envelopes to represent the two-stage softening behavior for a rock mass that distinguishes between damage (caused by fracturing and the associated loss of cohesion and tensile strength) and the subsequent disturbance (due to bulking) in rock mass behavior. This two-stage softening/weakening behavior in IMASS is critical to accurately represent the rock mass post-peak behavior for underground and surface mining applications.

IMASS is available as a built-in, optional constitutive model for 3DEC (version 7.0 or later) and is sold as a separate, monthly or annual lease, license.

3DEC simulates the nonlinear response of a system (soil, rock, and structures) to excitation from an external (e.g., seismic) source or internal (e.g. vibration or blasting) sources. It can reproduce the evolution of permanent movements due to yield. This option models the full dynamic response of a system in the time domain. Capabilities include specification of velocity or stress-wave input, quiet (i.e., viscous) boundaries, free-field conditions (ideal for earthquake simulation), and damping.

Problems such as seismic loading, explosive loading, seismic release of energy, and flow of particles may be modeled.

In 3DEC, the dynamic input can be applied as either a prescribed velocity history or as a stress history. An acceleration history needs to be integrated numerically first to produce a velocity history for 3DEC.

The thermal option in 3DEC allows the simulation of transient heat conduction. There are two separate formulations of the thermal logic. The first is a numerical formulation using the explicit or implicit finite difference method. This method is more accurate for short times, and includes thermal-mechanical fluid coupling. The second is an analytical formulation that uses superposition of point heat sources* in an infinite medium. This method is suitable for long thermal times, and is very fast.

Comparison of features available with numerical vs analytical formulations.

*Point heat sources may be placed individually, in lines, or in grids, to represent point, line, or plane sources of heating. This formulation yields rapid calculations, correct application of mechanical boundary conditions, incorporation of the infinite thermal boundary,and the ability to use inhomogeneous and anisotropic mechanical properties.

User-defined constitutive models can be written in C++ for both zoned block materials and joint materials. These are compiled as DLL files that can be loaded whenever needed with this option. Microsoft Visual Studio 2017 or 2019 is used to compile the DLL files. The main function of the constitutive model is to return new stresses, given strain increments. However, the model must also provide other information (such as name of the model and material property names) and describe certain details about how the model interacts with the code. Itasca maintains an online library of UDM C++ models where users can submit and download novel and useful constitutive models. 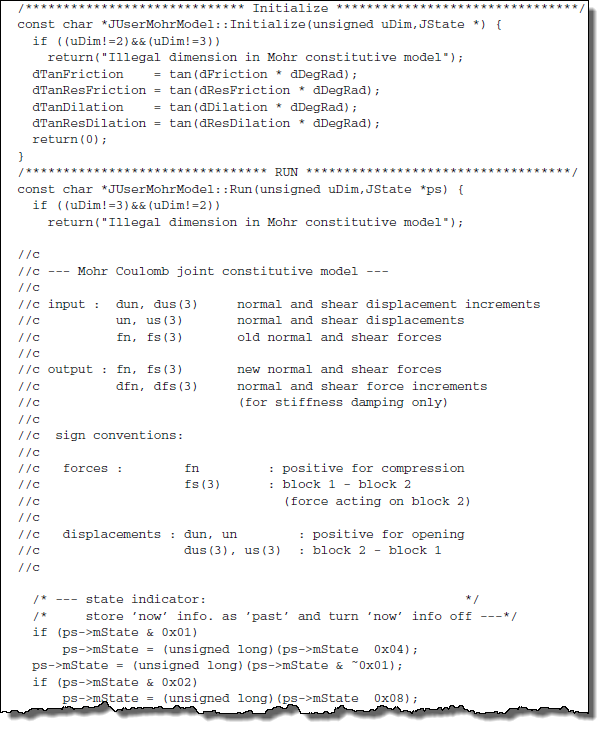