Three-Dimensional Stability Analysis in an Open-Pit Iron-Ore Mine

This project was developed in an iron-ore open-pit mine located in Brazil, which exhibits outcrops of friable rock units with a high contrast in rock stiffness between the different rock units of the deposit and a presence of a shear band in between units. Therefore, this study was aimed at understanding the failure mechanisms acting on the slopes. Considering the background information and the characteristics of the rock units at the site, FLAC3D was chosen as the best tool to correctly represent this problem. The study was based on three specific stages: 1) compilation and review of the geological, geotechnical, and structural information of the site; 2) a calibration stage based on reproducing to the best possible extent three documented instabilities; and 3) a predictive stage for the stability conditions of the slopes in future design (final pit), plus interramp angle (IRA) recommendations.

An iron-ore open-pit mine located in Brazil has experienced several documented instabilities. These events have been distributed in almost all slopes of the mine, inducing failure events that range from a single bench scale up to bench stacks 150 m high. Most of these failure events correspond to circular failures, which have occurred in different time scales, but each of these have been responsible for halting operations in the local areas of failure. In this context, it is critical to assess the stability condition of future mining and analyze if the interramp slope angles (IRAs) being used are well suited for the rock mass units present in the deposit.

This study aims to understand the failure mechanisms acting on the mine slopes in order to perform a reliable predictive three-dimensional geotechnical stability analysis and obtain recommendations on the design slope angles.

To accomplish the objective of the study, this project was planned in terms of three stages of work:

Geology of the Deposit

This deposit exhibits 11 lithologies ranging from friable rock units (which are extremely weak rocks) to competent rock units. The contrast between friable and competent rocks is evident not only in the strength properties, but also by a high contrast in rock stiffness. The main feature identified in the rock units, with special importance in the friable rock units, is the presence of foliation and bedding planes. In some parts of the mine, the orientation of these planes is unfavorable to the slope design. As an iron-ore deposit, the ferrous formation is delimited from a mafic formation by a shear band that exhibits significantly low strength parameters and has been a contributor to instabilities whenever it daylights in the slope.

Strength Parameters of the Materials in the Deposit

The properties of the materials in the deposit are shown in Table 1.

Due to the geological set of the mine deposit, the following approach was adopted:

The overall methodology is presented in this section, along with the description of the models used in each stage of the project.

For each model (representing each documented instability), the iteration process started with the mean value of each property for each rock unit (provided by the Client). As the calibration process progressed, the values were updated keeping their magnitudes within the measured range according to the test data.

The outcome of the predictive analysis is the assessment of the stability conditions of the Final Pit based on the calibrated properties. This is achieved through the calculation of Factor of Safety (FoS) using the Shear Strength Reduction (SSR) technique. Also, recommendations of the IRA are provided.

This section shows the results of simulating each instability using the final set of calibrated parameters.

As shown in Figure 1, the model shows a reasonable correlation with the documented instability. Although the model overpredicts the northmost extension of the documented failure, the extensions to the south, in the east-west axis, and in vertical are reasonable. In Section BB’ (N = 1440), a failure surface is observed that encompasses level 485 to 620 (failure height of 135 m), reaching a failure depth of 33 m, which is considered reasonable compared to the maximum height of the failure reported by the mine (105 m). It is relevant to notice the role of the shear band in controlling the failure extension. Because of the lower strength of this shear band, it becomes a preferential failure surface, controlling the stability of this area.

Instability 2 could not be reproduced (Figure 2). After several attempts, it was concluded that more factors need to be added to the model to represent the observed behavior.

For the calibration of Instability 3, the phreatic level was arbitrarily raised to 20 m below the surface of the pit. This was done to reproduce the saturation conditions reported in the documented instability. This approach is aimed at representing the reported lack of proper dewatering in the area where the instability occurred, but unfortunately also over-estimates the influence of water outside the failed area.

As shown in Figure 3, the model shows a fair correlation with the documented instability. When comparing the model prediction against the documented failure contour, it is necessary to emphasize the following:

In Section DD’ (N = 310), the model exhibits a failure surface that involves level 415 to 665 (failure height of 250 m), reaching a failure depth of 100 m. When compared to the reported failure, which reached a maximum height of 150 m, the model provides a reasonable result considering the assumption of raising the phreatic level.

Factors of Safety for Final Pit

The FoS contours are shown in Figure 3.

According to the previous figure, the slopes of the Final Pit exhibit the following:

All the points stated above highlight the importance of correct determination of the shear unit in this deposit.

The design charts with and without joints are shown in Figure 4. 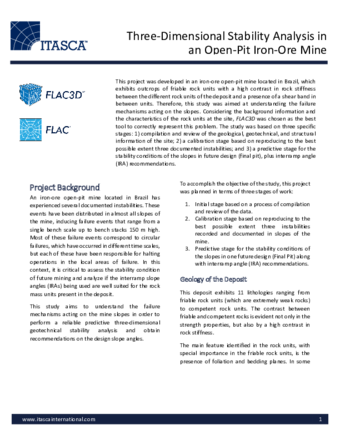