Located in Catamarca Argentina, the Bajo de La Alumbrera open pit mine experienced a large-scale instability along its southwestern wall on May 31, 2017. Referred to as the Steve-event, this failure mobilized approximately 700,000 t of rock from the peripheric level (2630 m) to the working area (2169 m) - a height of about 460 m (Figure 1) - interrupting mining for Pushback-12, the last productive mine sector. In 2012, Itasca had conducted predictive 3DEC numerical analysis on another, more aggressive, slope design, which suggested that a large-scale instability was possible in the same area (Figure 2).

Itasca performed additional numerical modelling analyses to back-analyze the 2017 instability to predict Factor of Safety (FS) contours and consider options to mine the remaining ore at the bottom of the pit.

Using the 2012 analysis as the starting point, the analysis was calibrated using field observations, where the geometry of mining excavations and structural interpretation were key inputs. Figure 3 shows a joint system and the projected Steve 4 (S4) and Steve 5 (S5) faults. The calibrated model was used to study excavation alternatives to resume mining of Pushback-12 whilst still meeting the required acceptance criterion (FS > 1.2).

The 3DEC model developed to back-analyze the instability achieved a good match with field observations. Figure 4 shows the calibration results as FS contours for each excavation stage in the 3DEC model. The estimated failed volume in the field was approximately 336,000 m3. The numerical model estimated a similar volume, 356,000 m3, based on the failed rock mass shown in red (for FS < 1.0).

In order to continue mining Pushback-12, the 3DEC modelling showed that a 204-m-high unloading excavation was required in order to maintain the acceptable criterion of the slope design (defined by an FS ≥ 1.2). This alternative was assessed as uneconomic by the mine, leading to the total closure of Pushback-12 and the mine. 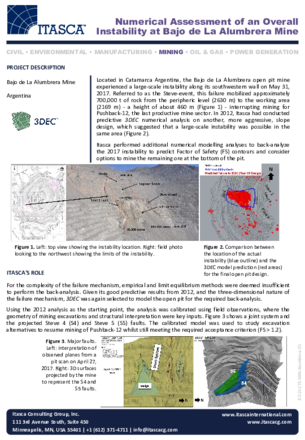