Effect of Shear Stresses on Pillar Stability Performance at Troy Mine

At Troy Mine, a progression of pillar failures within the Middle Quartzite unit of the Revett formation led to surface subsidence. Hecla Mining Company wanted to back-analyze this behavior to understand the level of stresses and failure mechanism leading to the collapse of some pillars in order to make forward predictions on pillar stability in the nearby Montanore deposit, which lies in a similar geomechanical setting. This study was used to inform the selection of local extraction ratios within the different beds at Montanore to achieve a pre-defined factor of safety (FoS).

A large-scale FLAC3D model (including topography, orebody geometry, and as-built pillar geometries) of the North Orebody at Troy Mine was constructed to understand the level of stresses that lead to pillar collapse.

A calibrated 3DEC Bonded Block Model then evaluated the impact that different pillar geometric characteristics (e.g., width, length, height, and shape) have on pillar performance under shear conditions for different depths (Figure 1, top) and extraction ratios. Site-specific design charts were then generated to provide guidance on pillar geometry. Mine-wide FLAC3D models were developed to predict the level of vertical stress and horizontal shear stress for pillars in the different ore-bearing beds at Montanore. The mine-wide pillar arrangements followed the minable beds (i.e., pillar height varied with bed thickness). A sensitivity study was performed for various conditions (e.g., extraction ratio, spatial location, and orebody geometry) with the aim of performing a mine-wide evaluation of the factor of safety against shear (Figure 1, bottom).

This study demonstrated that the orebody geometry in relation to topography led to significant shear stresses in pillars at Troy Mine. Shear stresses resulted in a significant loss of confinement in pillar cores, even at width-to-height ratios that would be deemed stable under zero shear stress (i.e., flat seam under flat topography). This has important implications because the use of design methods that do not take the effect of shear stresses into account may result in under-designed pillars, with a false assessment of rock mass strength being derived from traditional back-analyses.

Itasca was able to evaluate the local pillar factor of safety against shear by combining the local predicted level of vertical stress and horizontal shear stress for pillars in the different ore-bearing beds at Montanore with site-specific design charts. This allowed for the selection of local extraction ratios within the different beds to achieve a pre-defined factor of safety. 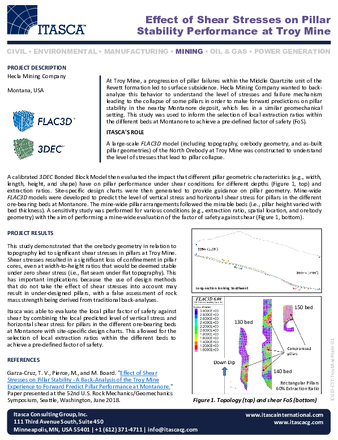