Estimating settlements due to a complex excavation

In the context of the Greater Paris works, the VINCI-SPIE group builds a future metro station underneath the CNIT centre in Paris, for the westward extension of RER E (EOLE). The West Pre-Station is particularly complex due to its excavation phasing and the presence of many surrounding structures, including among others the T2 tramway line and several foundations.

Given these constrains, a FLAC3D model has been developed to estimate the surface movements induced by the excavations, in order to validate the proposed work sequence and support system.

Four main structures are modelled: the Carpeaux gallery, the T2 stairway, the West twin-tube and the Pre-Station itself. Many neighbouring structures are taken into account: the CNIT car park, the existing foundations as well as the tramway (Fig. 1, 2).

More than 40 main stages are simulated.

Settlement evolutions along the tramway line are obtained. More than 80% of the final movements are developed during the top-down excavation of the Carpeaux gallery. The maximum settlement is located near a large niche excavated to connect the gallery top slab to the existing pile foundations (Fig. 3).

Settlement above the stairway tunnel is more than 1 cm and is primary due to a heavily loaded foundation raft nearby.

The excavation of the remaining structures, as well as the final groundwater rise, have only a limited influence on surface displacements, estimated at less than 0.5 cm. 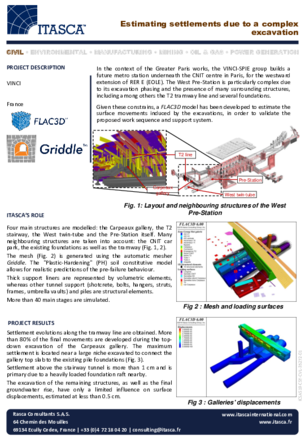