Fault Reactivation of Fractures Near a Generic Deep Nuclear Repository

Canada is in the process of locating a deep geological repository (DGR) for the containment and isolation of high-level nuclear waste generated from its nuclear power plants. The Nuclear Waste Management Organization (NWMO) worked with Itasca to assess the risks of a potentially large earthquake near the DGR that could cause enough deformation or movement on secondary fractures to damage waste canisters and/or provide potential pathways for radionuclide migration. Although low seismicity will be a key factor for the selected DGR site, due to the long storage time scales involved (1 million years), changing stresses (or other conditions) that may result in a potential large-scale fault slip need to be considered.

In this study, fault rupture and its effect on the deformation of the off-fault fractures are numerically simulated in order to determine the distance from a major seismogenic fault at which used nuclear fuel canisters could be safely placed.

Itasca numerically simulated and analyzed a generic DGR site using 3DEC models. First, to validate the suitability of using 3DEC to simulate earthquakes, a benchmark test from the SCEC/USGS Spontaneous Rupture Code Verification Project (Harris et al. 2009) was modeled. Next, to study the effect of earthquake slip on existing fractures, an overall model 100 km x 100 km x 60 km in size (Figure 1) was constructed, with most of the analyses conducted using a primary fault dip angle of 30° and 40° (base case) and an idealized elasto-plastic joint with a Coulomb slip shear failure mechanism. Based on a generic site in Northwestern Ontario, three different moment magnitude seismic events (base case Mw 6.1, 6.6, and 6.9) were considered. The off-fault fractures were modeled explicitly in 3DEC with a discrete fracture network (DFN) region that was 3 km x 3 km x 0.3 km (Figure 1). Rock properties were based on p-wave velocity for granite in Northwestern Ontario with in-situ stresses based on the current in-situ stresses plus glacially induced stresses at the end of a glacial cycle (i.e., vertical stress due to ice sheet is nil, but glacially induced stresses remain in the horizontal directions). The earthquake was induced in the model by reducing the fault strength to the residual value starting from the hypocenter and progressing radially at 70% of the shear wave speed in the rock mass.

The results of the 3DEC verification modeling were found to agree reasonably well with other models of the same benchmark problem. For generic DGR site models, the results indicated that, for the base case, the average shear displacement on the primary fault during the slip was 1.6 m while the maximum shear displacement was 3.4 m. With this base case, the simulation was repeated using five different DFN realizations where no off-fault fractures were predicted to slip more than 5 cm (Figure 2).

Increasing the event magnitude resulted in a greater number of fracture slippages over 5 cm and an increase in the distance to the fractures with such large displacements. In the case of Mw 6.6, the fractures slipping more than 5 cm were contained within 600 m from the reactivated fault. This distance increased to more than 1.5 km in the case of a Mw 6.9 event. However, even for the unlikely extreme Mw 6.9 event, the maximum displacement of fractures within 200 m of the reactivated fault was less than 20 cm. 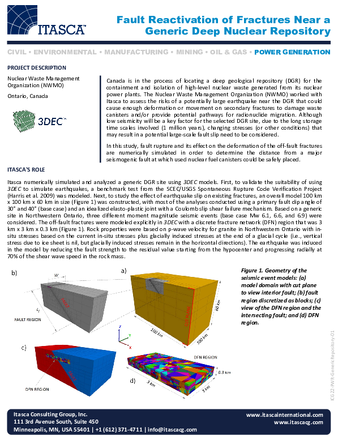